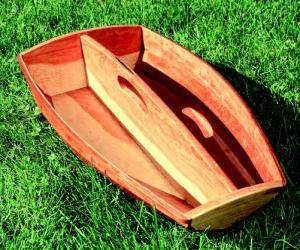 The trilogy of totes is concluded with the boat builder’s tool holder. No question what trade is represented. Seeing how this is designed may give you an idea for representing other trade interests. I remember when I first saw Steve Stier’s boat tote. Steve is a timber framer, preservation consultant, and fellow teacher in a class on half-hull models. It was at such a team teaching event that Steve showed up with his tools in a pram. It was head turning as well as a conversation starter. ’Seems Steve worked in boat yards down east in Maine.”

PRAM OR SHARPIE? Two boat designs rigged out as tool totes. I like the pram with its squared-off bow giving more tool room. However, its three-board sides are much more difficult to make.

There is nothing so effective as doing one for yourself to appreciate the skill of someone else. The pram tote is not easily planked. The compound curves of multiple planks are a challenge. And getting them to stay together while the glue dries is something else. The simpler version shown here is of a flat bottomed, slab sided boat.